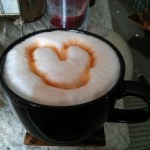 59. The battle of the bulge begins!

Yesterday I joined Jen and Jamie and signed up for MyFitnessPal (no cost). I trembled as I typed in my real weight. I cringed when I saw how far into the obese range I had moved. Reality is reality. Enough is enough. Yes, “the devil” in me says that going back to smoking would help me drop over 20lbs in a couple of months but we know that is not the way I am going to do it.

The process is interesting. The whole thing is automated and it works out what your ideal input is for the weight you want to lose. My goal is to lose a pound a week. Consistently. That would mean I could drop 50lbs I the coming year. That said, it does a clever psychological thing… it tells you that this is what you can eat without doing any exercise! If you add exercise you can add more things to eat AND STILL REACH YOUR GOAL. Clever!! I like that thinking.

It also doesn’t tell you what to eat. Freedom, is a good thing! It just calculates whatever you put into the system. Updates everything from calories to sodium. The only discipline I need is to put the truth in and be more aware. Aware, for example that a small apple has way more sugar than I knew. Education is another side benefit, apparently!

The one thing that surprised me yesterday was that I made it through the day without attacking the snacks – the super sugary, delightful indulgences!

I have just finished my 15 minute workout and asked myself what was different? Why did I made it through the day without eating the cookies or marshalmallows? Oh, I struggled in the last 40 mins but I hung in there. I then had a small eating need, just after midnight, but managed to just eat half a piece of bread with marmite – savory rather than sugary. Was it because I had a more balanced diet? One that I created because the system showed me where to be mindful? Interesting.

I also set up todays eating schedule before I went to sleep. Didn’t want to not know what to grab for because that is where the “quick” snack comes in to play. I have had the second half of my piece of bread this morning and will start the “breakfast” list in about an hour. It is not what time of day it is, it is about knowing I still have that much food available to me and STILL be under the goal. Good feeling!

I was surprised that I had incorrectly caculated the coffee situation. I had clicked on a store latte and last night I found out that the homemade version is way less. I had to go back and change the figures for yesterday.

I thought I would struggle to drink the eight cups of water. I decided that I would drink I cup every time I sat down at the computer. I needed to finish it before I started the next task. That made it easy to drink.

Firing up the BBQ… 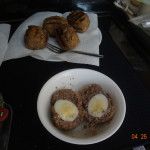 This week’s experiment – BBQ’d Scotch Eggs! They held together remarkably well. Still think I prefer them deep fried but it was a “slightly” healthier experiment.

I love my “Retirement Fridays” and the first thing I give myself permission to do is to sleep as long as my body needs. I got up late and then puttered at the computer learning more about Word Press which is the program that makes this blog work. It is fascinating and I am on, yet another, learning curve. 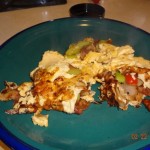 Brunch was my delicious Farmer’s Omelette omlette. I love to make these on the weekend to use up some of the onions, tomato, mushrooms, celery and other things like sweet peppers. It is easy to make a delicious to eat. If you are into potatoes you can also fry up some hashbrowns or chop up some potatoes and precook them before adding into the recipe. Whenever you make anything like this, just cook all the add-ins first and then put them aside and add them all in together at the final stage. It makes cooking this omelette so much easier.

As you know, I cook one meal a week for my tenants and it was roast beef and Yorkshire Puddings this week. There are times when I believe that I could cook Yorkshire Puddings and gravy and it would be received almost as well as the full meal. 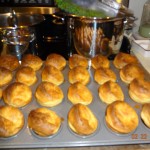 The problem about cooking these Yorkshires is that you have to cook them by the dozens because nearly everyone goes back for seconds. I love making them in the mini muffin pans because they look so good and are easy to distribute.

It has been a difficult week, weight-wise. The good news is that I am now at 43 smoke-free days but I am up 11 lbs. This past week started being a lot more emotional for me and it nearly took hold. I fought it and got my brain back in synch but the price was weight. I will continue to remind myself that losing weight is easier than stopping smoking. My main task is not to smoke. I am proud of myself for having kept the self-control this long. At least once a day I have a serious trigger wherein I want a cigarette. The good news is that it is not 15-20 times a day any more!

Lessons learned: Word Press is not quite as difficult as I thought it would be. Like everything else, it will just take time to conquer it.

Please donate if you appreciate the work we do

***My thanks to the kind subscriber, who wants to remain anonymous, for the wonderful banner design***